Kasilof River King Salmon are one of the earliest in river King Salmon runs in the state.  Typically the first fish caught on the Kenai happens right around the 15th of May and each day after continue to strengthen in numbers with a peak of the first run happening around the 10th of June.  These are a mixed bag of hatchery and “wild” salmon alike.  Many will argue that there is no longer a true “wild” fish strain of King Salmon in the first run on the Kasilof and I won’t argue to hard with that statement but whatever their origin they are all King Salmon and some of the greatest fighting fish around.

The Kasilof by nature is a shallow, swift and silty river, making for great hiding cover for these fish. A drift boat only fishery during this time frame creates a unique fishery where one can literally hook a 30lb fish less then 4 feet away from you.  The lack of visibility in the water allows these fish to feel very comfortable resting in shallow areas of the river, and having a quiet drift boat allows for an angler to ease right on down on these fish.  Add a back bouncing from Edge Rods by Gary Loomis and you have a hand to hand combat scenario staring you in the face.  The bite is fast and fierce and the second you set the hook into the corner of that fishes mouth all heck breaks loose.  Truly one of the greatest ways to get the blood flowing after a long winter in the cabin this fishery has always been one of our favorites.

There is a lull in the action as the month of June wears on, however starting the first half of July the giants start to enter the system.  Had the Kasilof not been so close to the Kenai it would be the star of the show in the Kenai Peninsula.  Big King’s call the Kasilof home, it could be argued that this river holds the second largest run in size of fish anywhere and only second to the Kenai.  These big fish enter daily all the way through the end of the season on July 31st and are destined for the giant Tustumena Lake that lies at the head of the system.

The river  continues to stay shallow throughout the summer but by July it is at full force and the current is as swift as any river you find.  Add this to the serenity of a drift boat and you have an epic battle in front of you that will be sure to provide detailed memories for a lifetime, or well until the next hook up. 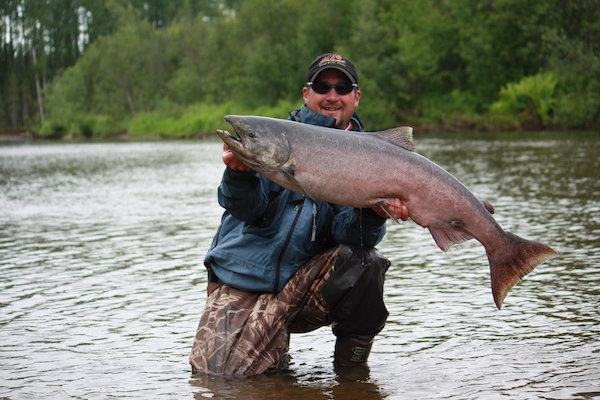 The Kasilof River is often referred to as the little brother of the Kenai.  Lying just 13 miles south of Soldotna and the Kenai the Kasilof is a swift glacial river originating from the 25 mile long 8th largest lake in Alaska, Tustumena Lake.  The Kasilof supports a run of King Salmon, Sockeye Salmon, Silver Salmon and Steelhead Trout.  Generally known as the earliest river fishery for King Salmon each of the species that call this river home are equally as enjoyable.  Thought most of the year the Kasilof is a drift boat only fishery, and in fact rarely does anyone run a power boat on the river due to its shallow, extremely rocky nature. 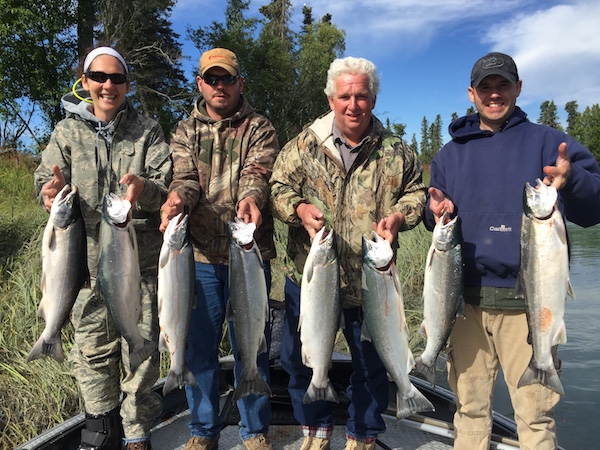 Kasilof Silver Salmon are one of the most overlooked fisheries in the state.  Boasting great returns this primarily August fishery is a hidden jewel.  The Kasilof is a full capacity this time of year creating the perfect scenario for shallow pocket water.  As with the King Salmon the murky waters of the Kasilof provide the perfect cover for these shy Silvers.  Flooding into the grass banks and creating little pockets all over the river make for great resting habitat and equally fun areas for anglers to fish.  A variety of methods work but making precise little casts with a spinner into a salad bowl size hole really makes it rewarding when that 10b silver comes busting out with your spinner in its mouth.  Typically a quiet fishery and unique hiding spots make for a really fun day on the water changing one of the greatest game fish on the planet. 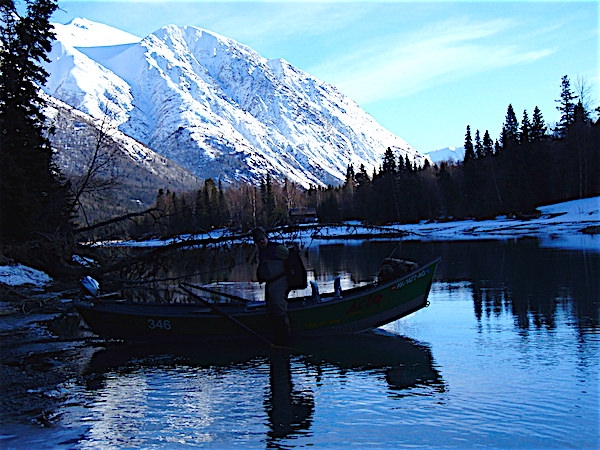 All trip prices are per person and subject to availability